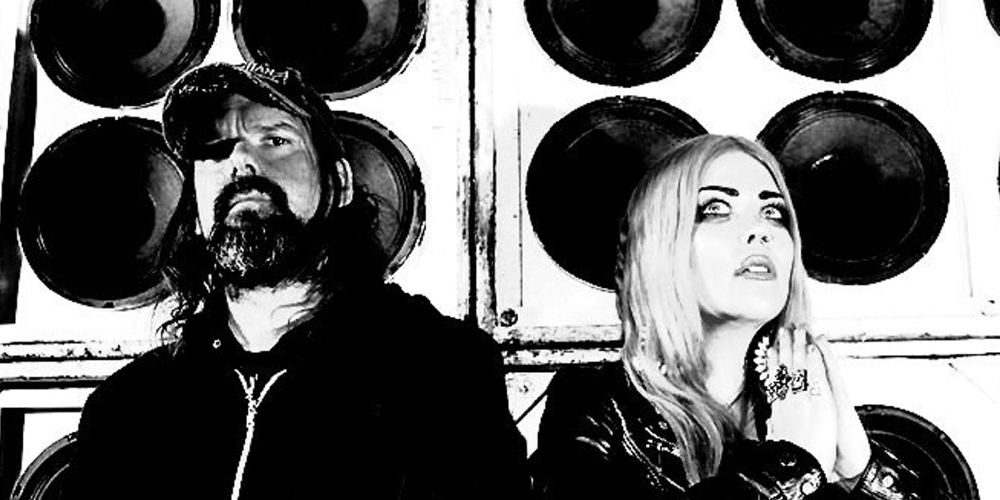 Jucifer, founded in 1993, are pioneers of the metal two piece. Their onstage sound, often loosely categorized as sludge, careens venomously through every extreme and tempo of metal and punk, with particular attention to black metal, old school death metal, and grind. Jucifer is notorious for the relentlessness of their live performances, their use of massive amplification, and the fact that the band has been nomadic for 18 of its 25 years in existence. They've stated that this homeless life was undertaken to facilitate playing “as many shows as we possibly can”. Jucifer's endless tour usually covers 20 or more countries each year.  Unlike heavy duos which use loops, backing tracks, guest musicians, or triggers to fill out their live sound, Jucifer relies on compositions designed to decimate with only real-time drums and distorted guitar. And for sonic reinforcement, a wall of speakers that typically rises 10 feet high and sprawls 15 feet wide. Jucifer’s use of many different amps and cabinets to create a full-spectrum, full-body sound experience predates the 00’s ‘amp wall’ trend. As well as being originators of using stadium-appropriate amplification in clubs, Jucifer’s rationale for their gear differs from later bands’ approach. Although Jucifer is renowned as one of the loudest bands in the world, both members have stated that volume is not their primary reason behind owning so much equipment, but rather a byproduct of their desire to be immersed in sound and of Valentine’s method to create her ideal tone. Guitarist Gazelle Amber Valentine has stated in interviews that she never turns her amps up all the way and that playing guitar through such a dynamic array of gear is “like building sound sculptures in the air”.

Founded at a bar in Kreuzberg... Now rising like a grumpy demon from the bowels of a damp cold cellar in Berlin.

Current Album: "Under the Manchineel"
(2018 out on Exile on Mainstream Records)
http://www.mainstreamrecords.de/

TREEDEON returns with the follow-up to their debut, Lowest Level Reincarnation, which was released some three years ago. The bruising second album, Under The Manchineel marks the arrival of a new drummer Andy Schuenemann, of post-rock instrumental duo Alphatrip, joining bassist/vocalist Yvonne Ducksworth and vocalist/guitarist Arne Heesch, and taking the band in an even heavier direction.

The seven tracks on "Under the Manchineel" have foundations in sludge, noise, and doom, also incorporating unexpected melodies into their colossal wall of sound. This thunderous catharsis, reaches levels of emotional intensity previously untapped within the album’s forty-five-minute lifespan. The lyrics are fueled by a multitude of political issues including general disenchantment with world events, and the current world order. The track “Manchineel” — one of the album’s many highlights — is a clear example of this as raging vocals of lyrical angst target all the forces declaring war on our society and our planet.